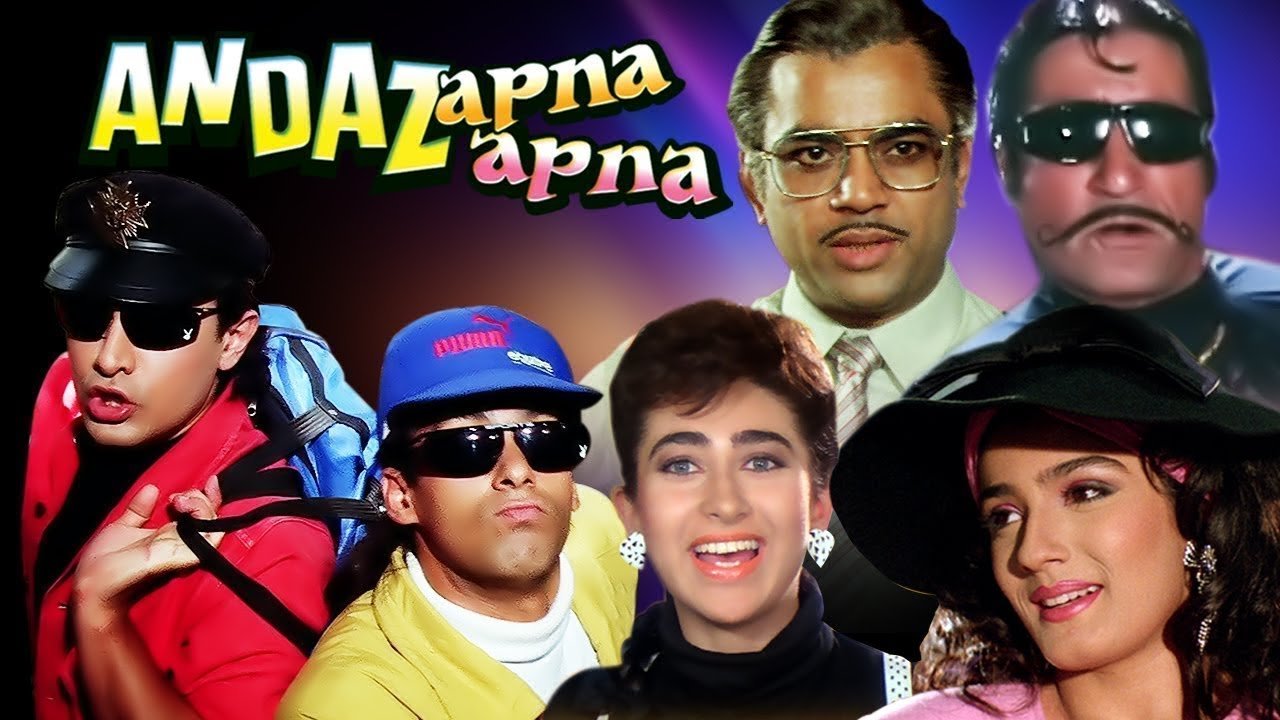 Here are some absolutely random fun facts from on the film Andaz Apna Apna. Some of these nuggets of information were part of my Facebook Live Quiz show – “The Almost Impossible Bollywood Quiz with Rohit Jayakaran.” Enjoy this dose of randomness and be sure to join me on the next episode of the quiz show.

1. Juhi Chawla and Govinda are shooting for a film called Pehra in Amar’s dream.

6. The song ‘Papa kehte they’ plays in the background as Amar inaugurates the new police station for Inspector Pandey.

8. Prem’s blue cap that makes him look like a monkey wearing a watermelon has a Puma logo on it.

11. Tilu gets his memory back as a result of his cheeks being rubbed by Raveena.

12. Inspector Pandey’s new police station was built in a record time of two and half months.

13. The first thing Crime Master Gogo steals in the film is a scooter.

14. When Amar disguises himself as a horse cart driver, he tells Prem that if his 8th wife dropped a flower the Qutub Minar he would jump to get it.

15. Amar and Prem decide to come up with a master plan to meet Raveena when they find that there is a token system to manage queues and one of their friends has token number 717.

17. Harishankar is father of Raveena Tandon who plays the role of Karishma but acts like she is Raveena.

18. When Amar loses his memory, he is given the name Tilu based on the fact that he was found next to the hills.

21. The town were Amar and Prem’s Saphire Super Deluxe Coach stops for chai on the way to Ooty is Naduvattam.

22. Amar calls the waiter who serves them tea – Butler Danny.

23. Running water is available only between 1AM and 2AM at the Sevaram Lodge.

24. Raveena is using a Mamiya C330 to click photos when Amar appears in front of her in a yellow shirt and starts singing ‘Dil Karta Hai.’

25. Every morning after waking up at 6AM, Ram Gopal Bajaj goes jogging in front of the Ladies Hostel.

28. The juice Robert serves on his birthday is called Sharbat-e-Jannat.

29. Tilu turns out to be Bhairavgarh’s Thakur Vikram Singh’s Son – Amar Singh whose hobbies are hunting and playing football.

30. Amar Singh who is the recovered Tilu scored 6 goals for Mohan Bagan in 1988.

33. Amar claims he bought his red jacket from New York. This jacket makes him look like a retired monkey from the circus.

34. When Amar and Prem hug each other it reminds the Sevaram Lodge owner of episode 11 of Ramayan that first aired on April 12, 1987.

38. Amar and Prem are 3 minutes late for their appointment to meet Ram Gopal Bajaj to ask for his daughter’s hand in marriage. The meeting was scheduled for 6 minutes.

39. Robert suggests that since Ram Gopal Bajaj plans everything down to the minute, his name should be HMT.

41. Amar and Prem hide in an Ambassador Nova that Teja is driving to check out what he is up to.

43. To amuse themselves while they are locked up, Teja suggest Amar, Prem and Ram Bajaj play the card game Rummy.

44. Robert who is sometimes called Rabbit used to be a champion in Gola Phenak (Shot Put).

47. In the 1966 film ‘Pyaar Kiye Jaa’, Mehmood plays a person who own a film production house called ‘Wah Wah Productions’.

27 Dabangg Fun Fact and Trivia Stand By Me (Dildaara)