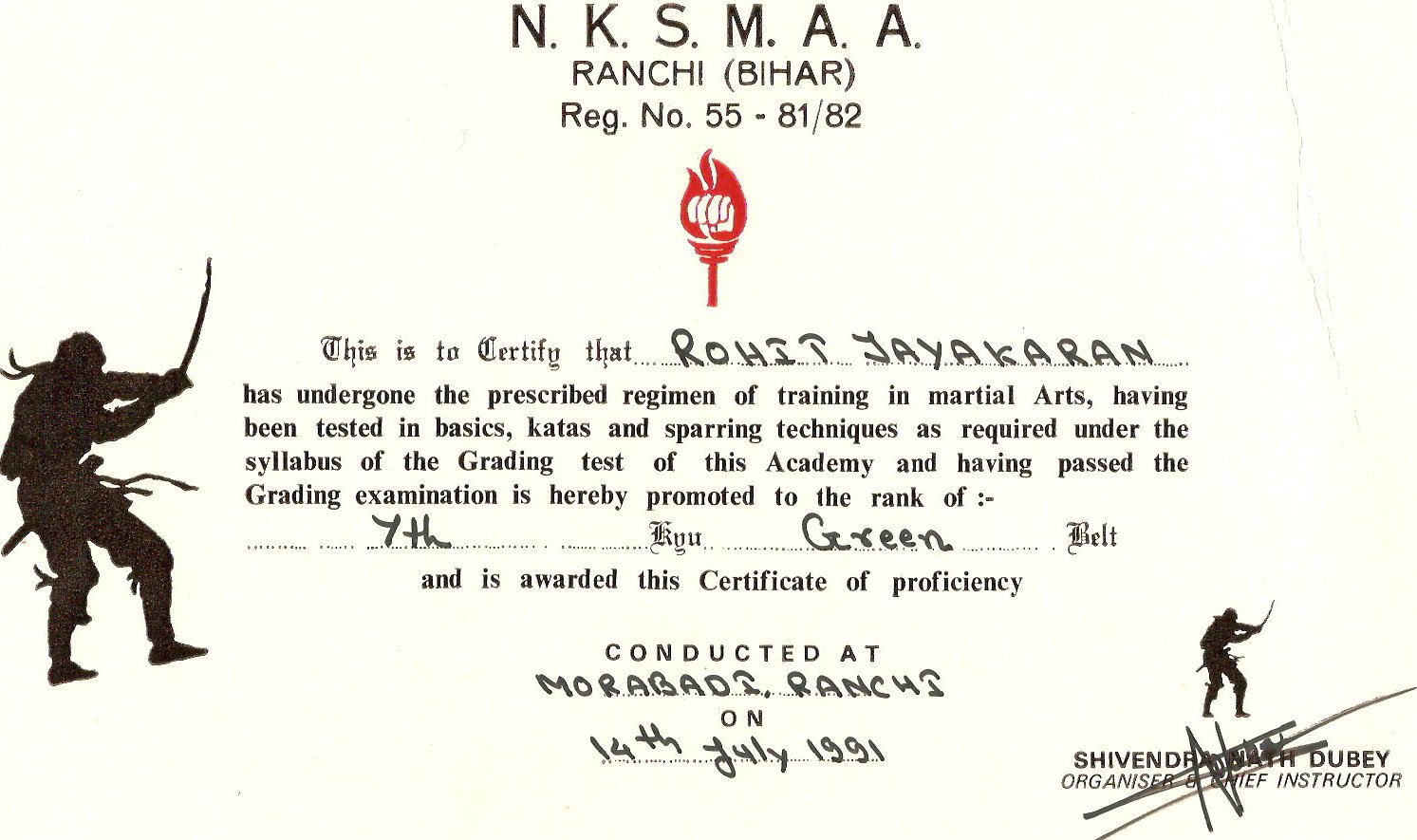 Yes, the above statement is more or less true…I can kick your ass ‘IF’ I wanted to. How you may ask??? Those of you who know me, perhaps know that my last fight ended in me getting a small scar under my right eye…but that’s only because I had forgotten some vital information that got me out of so many fights in school. You see…today while I was looking through some old stuff at home, I found some old certificates. Actually, coming to think of it, all my certificates are old…I don’t seem to have done anything lately deserving an official certificate. Pity!!! (Note to Self: Time for reevaluation)

So…back to this old certificate…well its from my Karate Class from like the 1990’s. When I saw this I was super excited. I was ACTUALLY a Green Belt. Green Belt…wow…I’d reached GREEN!!! Why did I ever stop???

For those of you who have never been for Karate Classes as kids and instead were busy playing house-house with your Barbie dolls, let me explain to you how this works…First, when you pay your fees for Karate Class, you get like a date and time you need to come and pick up your uniform. In my case, we saved a little money because my grandmother said she could stitch my brother and my ‘Combat Attire.’ I must say that the sample we were give was slightly different from what all the other kids were wearing and the color of the cloth was also a not-so-intimidating dull off-white while everyone else wore WHITE.

So…once you get your ‘Combat Attire’ you also get what is called a White Belt with it. This means you come to Karate Class but all you do is stretching exercises and learn to touch your toes. In the middle of these two ‘strenuous’ exercises, you need to do something like 100 to 150 push ups. Yes…they let you off easy since you are a novice…a kid…a baccha…a smurf among gladiators. Once you pass White Belt, you move to Yellow Belt. If you fail White Belt…you should just get back to playing house-house with Barbie and her friends.

Yellow Belt is a lot more serious. This is where you get introduced to the complex world of the Japanese Language. Yes…yes…for those of you wondering…yes I am fluent in the first five numbers of the Japanese Language. From Yellow belt you move to Orange Belt. This is the time when people start noticing you. You see the first two belts are no big deal…by the time you reach Orange Belt, you make a conscience effort to walk home after Karate Class WITH your belt on. RESPECT comes with the Orange Belt.

By now your vocabulary of Japanese words goes well beyond the first five numbers and names of major automobile manufacturers. By now you have learnt words like – Tasukete! (tah-soo-keh-teh!)…that means HELP!!! NO NO NO…you chicken…you learn that word so you can help OTHER people….not use it yourself.

Once fluency is achieved in the pronunciation and fluidity in movement, you move to the Blue Belt. By now you have achieved almost Mafia status at school. You walk into a room and all the girls are clambering over each other just to say, “Rohito San, Toire wa doko desu ka?” Your response is a polite hand gesture indicating the location of the toilet…because you are the only Blue Belt around who know that they were asking you for the location of the toilet in Japanese. Ahhh…the good times.

Blue belt soon moves to Purple belt. This is where you are blinded by your own power and abilities. By this time, all your birthday presents have become things like – ‘Nunchakus’ and ‘Katanas.’ For those of you unfamiliar with these ‘Weapons of Individual Destruction,’ – ‘Nunchaku’…is what you civilians call ‘Nunchucks’…if you still don’t know what that is…well…its something like your Nintendo Wii Controller…but a little more practical enabling you to kill your opponent in just TWO blows. The second weapon I mentioned is the ‘Katana’…i.e…the ‘Samurai Sword.’ This is for those who are impatient and would like to kill their opponent with just ONE blow.

Purple belt as you can see is a tough one. This leads to – GREEN BELT. Yes ladies…I have a GREEN BELT…ok not the actual GREEN BELT per say…my mom threw that out a long time ago…but I have the certificate stating that I am a GREEN BELT.

Now the question on all your minds… “Well Rohit, if you were so full of AWESOMENESS…why did you stop Karate Class?” Ok…now I know you think I am making this up…but trust me I am not…All this happened in Bihar in the 1990’s…basically the Karate Class stopped because my Karate teacher kind of got shot in the face. Yup…the damn Samurai Sword is just no match for a GUN!!!